Still trying to overcome what has happened. Still facing uncertainties. Still unsure what needs to be done.

In the midst of such crisis, opportunities were pouring in. I have turned some down. Some still pending for my decision. And I am hoping for some more better opportunities.

Am I being greedy?
Posted by Cakes For Thoughts at 9:28 PM 7 comments:

Things have not been going on well as planned for me. I am not going to go into it. As the more I talk about it, the angrier I become. I can't seem to accept the fact yet. Hell....it wasn't my fault at all that I am in such a shity spot now. Hmmpphhh......

Life still has to go on, ain't it? Many friends have suggested that I start a little baking business from home. Cakes and cupcakes!

I was kinda reluctant initially coz baking and decorating cakes is my hobby. I really do not want to be sitting in the kitchen all day long smelling myself of butter and vanilla and choco and everything else.

But there were a lot of encouragements from good old friends and hence I have decided to just give it a try.
I am taking orders for cupcakes especially. Suitable for any occasions. You name it, I'll bake it.

Do drop by at http://www.cakesforthoughts.blogspot.com
Posted by Cakes For Thoughts at 10:33 AM No comments:

Didn't realise that it has been almost a year since my last post. Perhaps it's time to revive the blog.

Been really busy of late. Seriously not too sure why am I forever so busy. Must have been due to my poor management skills. Sigh.....

Btw I have been on cupcake baking craze. Not sure if this is just hangat hangat ayam or it will be a permanent hobby.

Oh well...enough of ranting. Back to work and will think of more to blog.
Posted by Cakes For Thoughts at 5:30 PM No comments:

Email ThisBlogThis!Share to TwitterShare to FacebookShare to Pinterest
Labels: Miscellaneous

I have been freaking busy over the past months. Somehow by the time I get home after work , I feel so drained out that my mind just went empty and I have nothing to blog.Guess age is really, really catching up.

Sometime in March I received a call from a girl who works in BluInc. Well, actually I have been contemplating if I should even blog about it. I just hated the outcome. Duh! But then...on second thoughts...what the heck! It's already being seen by thousands of readers nationwide.

Oh, well...back to the story....I got this call and was asked if I am keen for a beauty makeover which will be published in April's issue. I was initially excited. And so I said 'yes'.
I went to their office where the photoshoot was to take place. One hairstylist came from BSC to do my hair. She was told to curl it and then make my hair look natural and elegant. The make-up artist is from Bodyshop.

So I sat down and the hairstylist started to curl my hair. Looked myself into the mirror and I didn't quite like what I saw. But I said to myself...maybe I'm not used to seeing myself like this. Maybe because I am still without make-up, hence I looked so ugly. Maybe after the make-up, I will look ok. Maybe when it's on the magazine some touch ups will be done. So many maybe's.

Then the make-up artist turn to apply make-up on me. Hmm.....maybe I am outdated. Those days when I was taught on applying makeup, I have to use highlighter, concealer etc etc to make my nose look sharper, to shorten my face since it's too long, re-shape my lips and on and on. But this guy did it quite simply. Nothing of what I learned applies. After that, it was the hairstylist's turn again. Touch touch my hair, blow a bit. She couldn't get the style that she wanted. No choice.

Then I saw one good looking guy...no shirt. I could tell he's an European from his thick accent. He's got 4 packs...and another 2 packs slightly visible. Young, lean, dark brown hair. Real good looking. Must have just finished photo shooting because he came to remove his make-up and to get dressed. He was wiping off some water on his shoulder (must have been water sprayed on him to make him look sweaty). And there I was seated there looking at him through the mirror.

Guess what...?? He didn't even lift a wink to look at me!
How sad.....but that is understandable. If I were him, I won't either because I feel and looked like an old auntie at that point of time. I expected the makeover to make me look younger but I was wrong. 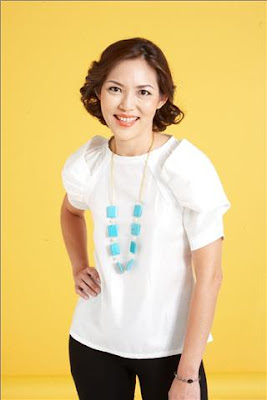 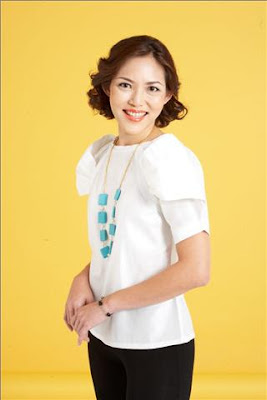 See lah...I looked so old. The hair is so ugly.

How sad.
Posted by Cakes For Thoughts at 5:42 PM 3 comments:

A New Year, A New Beginning

For the past 3x years, I have been ushering in the New Year by celebrating my birthday. This year was a bit different because I had so many friends from primary school to secondary school to colleagues and family who wished and celebrated it with me.

I had my early birthday present from Miss R who gave me this pair of earrings on the 29th Dec. 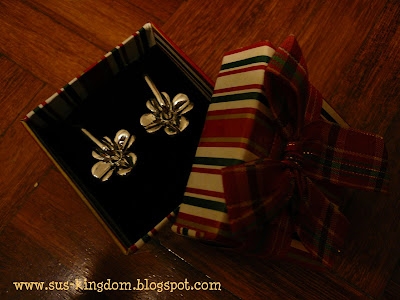 Then I received a birthday wish from a primary school classmate, Pn F, whom I have not met for 25 years.
Then on the 30th Dec, I had another surprise from an old friend, Mr.V. He gave me this pair of earrings. What a surprise! I had 2 pairs of earrings this year. How do they know I'm a crazy fan of earrings, though I have to admit sometimes I'm just too lazy to wear them? 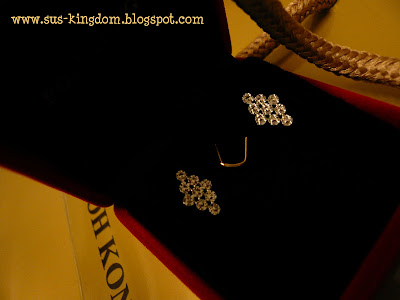 On the 30th itself, I was chatting with Miss J and I asked if she'd like to join me on a shopping spree on the 31st of which she agreed. So the 2 of us met at Sunway Pyramid at 9:15am. People must think the 2 of us are mad...shops were not even opened yet. Anyhow, we had breakfast first and then at 10am our journey begans. First target was Esprit.
We did a lot of walking. But couldn't seem to find anything suitable. It's either the size is not right or the price is not right. Jalan-jalan until past 2pm only did we realise we had not had our lunch. While eating, I got a call from Mr.J who said he is dropping by and told to meet him in Starbucks.
Before going over to Starbucks, Ms J wanted to get some doughnuts from Krispy Kreme. And guess what? She got some for me for my birthday. So sweet of her. 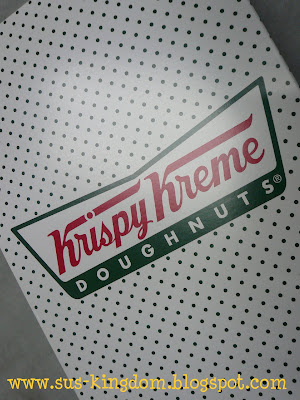 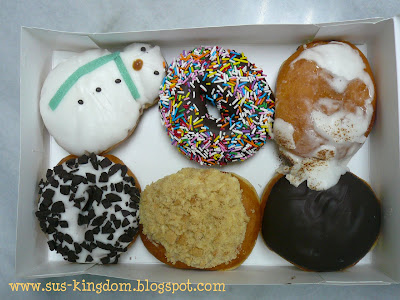 So, we met Mr. J. And he gave me this.Very nicely packed. Another surprise. I didn't expect him to get me anything. We only reconnected like a month or so as we have lost touch after our secondary years. 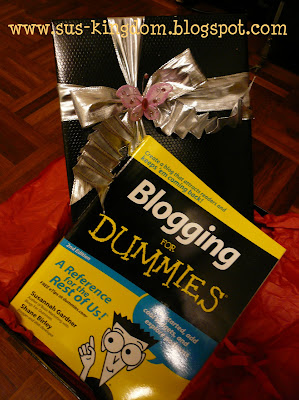 Then come midnight. I received extremely many well wishes from so many people. I got up the next morning to find a sms from my brother, which after reading it I felt so touched that I cried.
My brother, whom I hardly talk to and even if we did, it is just a few words. My brother, whom I always fought with like cat and dog. I realised even though we don't share the same opinion, even though we don't agree with many things, we are after all siblings and when any of us are in trouble, we just stood by each other. His sms clearly tells me that he cares and love me. It's just that we do not express it openly...not a tradition in our family...so shy la to say it out loud.
Come evening, he and his wife came with a birthday cake. A birthday cake!!! What in the world...I don't want to blow candles and have people singing me birthday song. I'm not 3 years old. I am thirty something, for crying out loud. Anyway, after some debate with my aunt over how many candles to put on the cake, my mom finally said, birthday girl makes the decision. Yeaa...thank you, mom.
And so my birthday cake has 1 candle. 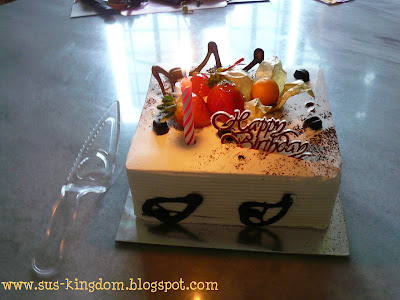 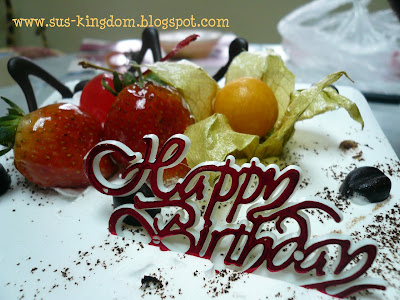 After the birthday song ( yes, can't escape that one) and cake cutting, I carried on with my bicycle cycling.
What more could I say? I feel so blessed and happy. I don't need expensive gifts or a big celebration. I have friends from all over who wished me. Those who knew me remembered my birthday. And I have friends who were just by my side whenever I am in need. What more could I ask for?
I have only 1 sibling and what he did made me so happy. I am so lucky to have all my family and friends around me. Life has its ups and downs. With good company, the downs would eventually become the ups.
And so, in the end I have earrings to make myself look pretty, I have doughnuts to fill up my stomach while I lay on the couch with a good book to read.
Thank you all of you. It is a really good beginning to year 2010. Let's all prosper and have a blessed year ahead.
Posted by Cakes For Thoughts at 8:42 PM 6 comments:

Most of the time, during the night, before Edrik and I go to bed, we have to have a round of game.

Simple games like tickling one another or telling stories or jokes. Sometimes we end up arguing. At times it can get quite bad.

One night Edrik started tickling me. In the midst of tickling, he got angry. I didn't know why. Then he started to sulk and took his bolster and slept on the floor. Crazy boy. I told him to come back up but he refused so I got angry because he was sulking. Then I said fine...don't come back up the bed and effective the next day, please sleep in your own room. I was angry the night before and couldn't help laughing when I read this.
Posted by Cakes For Thoughts at 11:34 PM 2 comments:

Today is the 2nd day without Edrik at home. He has left for his drama camp - a 4D 3N program.

The entire household is unusually quiet without him. When I got back from work last night, my aunt said, "it's so boring without Edrik around. We have no one to nag at. We have no one to mess up the place". Oh well...that is Edrik alright, messy and noisy.
Yesterday while at work, I came across a message which read like this: 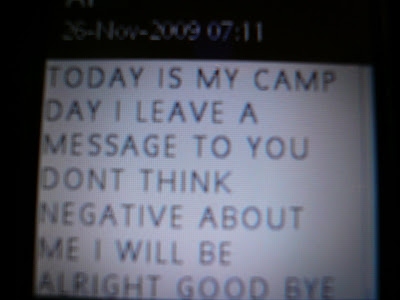 A simple message that really melted my heart. I guess he was trying to tell me not to worry about him because I was reminding him about taking good care of himself.
Today to kill the loneliness, I went on a shopping spree. Somehow no matter how hard I try to keep myself occupied, I still think of him.
Oh..the little devil......I can't wait to see him on Sunday. I just got to tell him how much I missed him.
Posted by Cakes For Thoughts at 11:22 PM No comments: